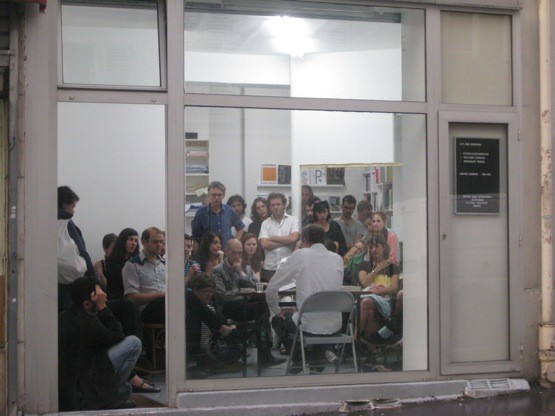 No, no, we’re not announcing that we are closing for the summer holidays. Not yet. Not quite. Ok, summer is for slacking, we don’t argue with this, but there are many ways of slacking, and spending some time at castillo/corrales listening to and meeting with some of the most talented writers active today is perhaps one of the highest form of summer slacking, at least when you’re in Paris, and the only beach around is the environmentally-evil Paris-Plages.

On Thursday, 23rd at 8pm, we will host Cologne-based American novelist and cultural critic Mark von Schlegell, for a lecture/reading. MVS is not an artist who writes, which would not be something that special. Yet, he’s a writer who publishes almost exclusively in the art context. What else does he do? He believes in the role of small presses as active agents against cultural standardization, including the commodification of art practice. The editor of The Rambler, an insurrectional pamphlet in Los Angeles, MVS has an habit of spreading texts through various magazines and publishers, including Semiotext(e), the Journal of Aesthetics and Protest or Pork Salad Press. Besides his literature and art critical inquiries, recently on Robert Smithson or Dan Graham, his dystopian insights on the society of control and cultural domestication expand in his science-fiction writings, and increase in an ongoing saga titled « Systems Series », published by Semiotext(e).

For his talk at c/c, and to introduce his way of blending fiction with criticism, MVS will rely on the books of the « Systems Series», Venusia and Mercury Station, and on a new literary essay, Realometer, soon to be released by Merve Verlag in Berlin. « If you ask me for criticism, expect a story. Science fiction helps my criticism », he says. « I often mix it in directly now. I found it adds humor, imagination, makes what is often a terrible chore done for money suddenly fun to do.»

Thanks to Jennifer Teets and Kadist Art Foundation