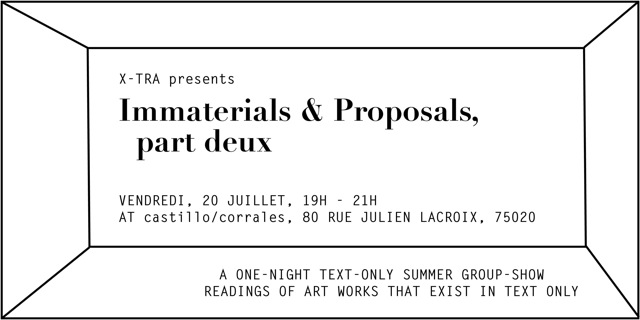 Presented with Shana Lutker and the Los Angeles based magazine X-TRA, we invite you to be a part of an event on July 20th at castillo/corrales, 19 p.m. – 21 p.m.
Immaterials and Proposals, part deux is a collaborative reading, a one-night summer group show.

A reprise of an event organized by Shana Lutker for X-TRA in December 2011 in Los Angeles, we invite you to be a part of the reading: select and read an art work that exists in text only.
The chosen works will outline or propose an artwork, exhibition, film script or artistic entity, that is not, and will not, take a material form other than a text or a reading.
Your selection must be the work of another artist/author/curator.

Some suggested guidelines:
Immaterials and Proposals, part deux should exclude:
- works/exhibitions conceived before 1990

Immaterials and Proposals, part deux should include works/exhibitions mentioning:
- parties and protests
- artist/author/curator died before the work could be realized
- financial downturn

X-TRA is a quaterly contemporary art revue collectively edited by an independent board of artists and writers based in Los Angeles.
Website and program of first event in Los Angeles: Immaterials and Proposals