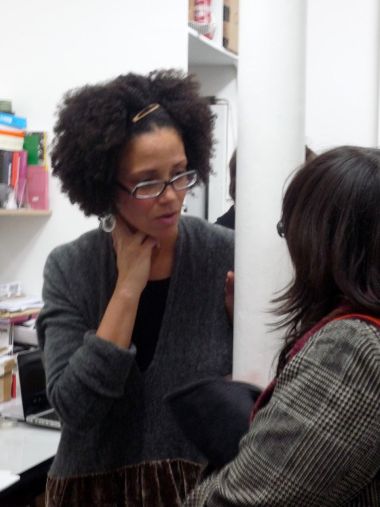 In anticipation of the group exhibition “Self as Disappearance” curated by Mathieu K. Abonnenc at La Synagogue de Delme (Feb 19 – May 23), to which she is taking part, the Cuban-American artist and writer Coco Fusco will give a talk and discuss with Abonnenc at the bookstore this Tuesday at 7pm. One of the subjects will be “Buried Pigs with Moros”, an installation through which the artist builds up a history of torture acts directed religious communities, from the Philipine-American to Guantanamo.

A selection of publications by Coco Fusco are available at section 7 books, including “A Field Guide for Female Interrogators” (Seven Stories Press, 2008), and its French edition “Petit manuel de torture à l’usage des femmes-soldats” (Les Prairies Ordinaires, 2008); “Only skin deep: Changing visions of the American self” (Harry Abrams, 2003); “The Bodies That Were Not Ours and other writings” (Routledge/Iniva, 2001); “Corpus Delecti: Performance Art of the Americas” (Routledge, 1999), and “English is Broken Here: Notes on Cultural Fusion in the Americas”, The New Press, 1995.