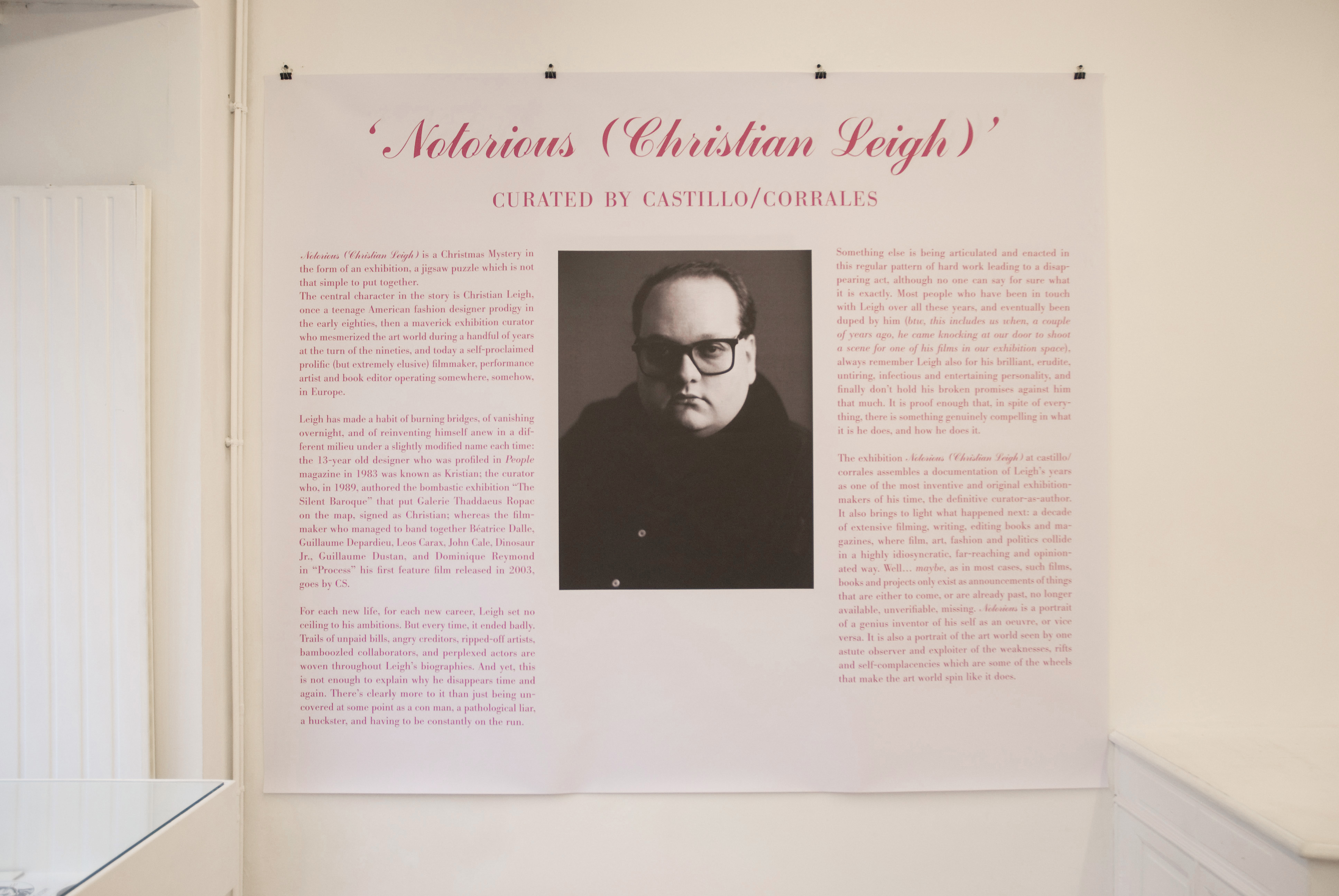 “Notorious (Christian Leigh)” is a Christmas Mystery in the form of an exhibition, a jigsaw puzzle which is not that simple to put together. The central character in the story is Christian Leigh, once a teenage American fashion designer prodigy in the early eighties, then a maverick exhibition curator who mesmerized the art world during a handful of years at the turn of the nineties, and today a self-proclaimed prolific (but extremely elusive) filmmaker, performance artist and book editor operating somewhere, somehow, in Europe.

Leigh has made a habit of burning bridges, of vanishing overnight, and of reinventing himself anew in a different milieu under a slightly modified name each time: the 13-year old designer who was profiled in People magazine in 1983 was known as Kristian; the curator who, in 1989, authored the bombastic exhibition “The Silent Baroque” that put Galerie Thaddaeus Ropac on the map, signed as Christian; whereas the filmmaker who managed to band together Béatrice Dalle, Guillaume Depardieu, Leos Carax, John Cale, Dinosaur Jr., Guillaume Dustan, and Dominique Reymond in “Process”, his first feature film released in 2003, goes by CS.

For each new life, for each new career, Leigh set no ceiling to his ambitions. But every time, it ended badly. Trails of unpaid bills, angry creditors, ripped-off artists, bamboozled collaborators, and perplexed actors are woven throughout Leigh’s biographies. And yet, this is not enough to explain why he disappears time and again. There’s clearly more to it than just being uncovered at some point as a con man, a pathological liar, a huckster, and having to be constantly on the run.

Something else is being articulated and enacted in this regular pattern of hard work leading to a disappearing act, although no one can say for sure what it is exactly. Most people who have been in touch with Leigh over all these years, and eventually been duped by him (btw, this includes us when, a couple of years ago, he came knocking at our door to shoot a scene for one of his films in our exhibition space), always remember Leigh also for his brilliant, erudite, untiring, infectious and entertaining personality, and finally don’t hold his broken promises against him that much. It is proof enough that, in spite of everything, there is something genuinely compelling in what it is he does, and how he does it.

The exhibition NOTORIOUS (CHRISTIAN LEIGH) at castillo/corrales assembles a documentation of Leigh’s years as one of the most inventive and original exhibition-makers of his time, the definitive curator-as-author. It also brings to light what happened next: a decade of extensive filming, writing, editing books and magazines, where film, art, fashion and politics collide in a highly idiosyncratic, far-reaching and opinionated way. Well… maybe, as in most cases, such films, books and projects only exist as announcements of things that are either to come, or are already past, no longer available, unverifiable, missing. NOTORIOUS is a portrait of a genius inventor of his self as an oeuvre, or vice versa. It is also a portrait of the art world seen by one astute observer and exploiter of the weaknesses, rifts and self-complacencies which are some of the wheels that make the art world spin like it does.