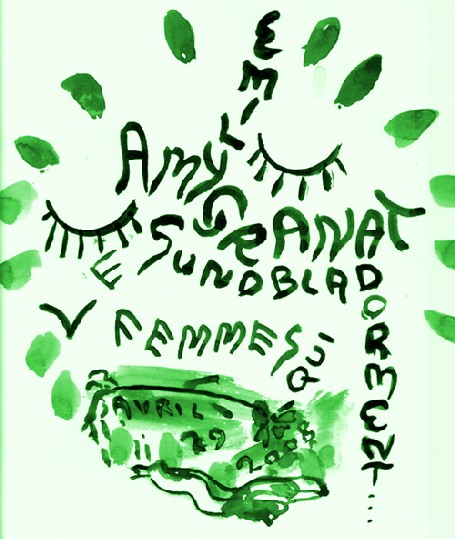 So they came down from the North. Or so they said.
Carrying all they owned; stumbling from exhaustion.
They tried to put up a fight but lost. So we asked them to stay.
To have a drink and rest. And regain their strength.

Screening of their recent collaborative film works on 16mm, including Egg, Pumpkin,Flowers, Beaches, Birthday Cake, and Walking with Truffles.
And performances, maybe.

Amy Granat is an artist living in New York, known for her interest in the legacy of experimental and underground cinema. Emily Sundblad is an artist, gallerist, singer and actress, also living in New York, where she operates the gallery/ongoing collaborative performance project Reena Spaulings Fine Art. The films of the two often feature both women performing simple, repetitive actions in outdoor settings, exchanging the wind-up 16mm camera to take turns shooting. They are pretty funny films.

Following the event on April 29th, castillo/corrales will present a three-screen installation by Granat & Sundblad for a month, which means until the end of May. 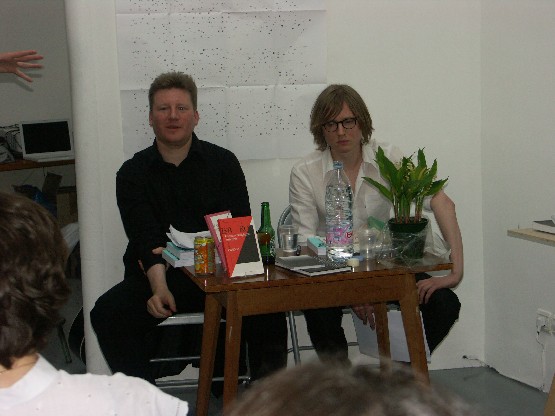 This latest issue, OEI (R)Ed. Est., is a voyage into the more or less uncharted territory of editorial aesthetics. The issue constitutes a broad-ranged, multidisciplinary, investigation of editorial space understood as a site in which practices and materials are worked through, analyzed, examined, displaced, transcribed, reformed, renegotiated, remediated, reedited…

OEI (R)Ed. Est. contains, among other things, reprints of pages from Vito Acconci & Bernadette Mayer’s 0 to 9; translations of La Rédaction, Craig Dworkin, Liz Kotz, and Harun Farocki; essays about Leslie Scalapino, Jean-Luc Godard and Jarl Hammarberg; contributions from editors of magazines like Multitudes or Cabinet; a presentation of the legendary Boulevardkartongen Tvångs-Blandaren (an issue of the Swedish periodicalBlandaren, edited by among others a young Pontus Hultén and which had a seminal influence on George Maciunas and the so-called Fluxus boxes); an extensive presentation of the projected but never-realized journals Krise und Kritik (ed. Walter Benjamin and Bertolt Brecht) and Revue Internationale (ed. Maurice Blanchot…), etc. Last but not least, a whole section of the magazine is dedicated to Art & Language and the great journal Art-Language. 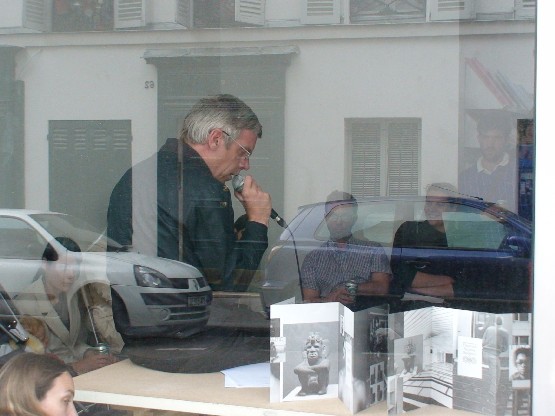 It can look like there is a Swedish season going on at castillo/corrales, or a Swedish twist on the program. How come? Will it continue like this? And for how long? Speculations are open.

Following the performative presentation of the journal OEI earlier this month, castillo/corrales is pleased to offer its faithful audience another moment of concrete poetry. Delivered this time by Berlin-based Swedish artist Karl Holmqvist.

Karl Holmqvist works with images, objects, video, but first and foremost with language and printed matter. His writings draw from the experimental techniques of Brion Gysin, William Burroughs and the like — cut-up, permutation, foldings et al. Using text as material and sources as a diverse as Allen Ginsberg, David Bowie or Walt Whitman, Holmqvist explores the mechanics of language and constructs a form of critical lyricism.

Holmqvist’ s readings are performances one should not miss, marked by the specific and calm presence of the artist, his distinctive voice and breathing, rhythm modulations and nuances, from murmur or whisper to litany and praise.

Holmqvist’s reading at c/c will be based on one of his latest works, specifically imagined for the first issue of FACEHUG, a periodical created in Berlin in 2007 by Ana-Maria Hadji-Culea, that castillo/corrales is glad to have in its bookstore, Section 7 Books.

castillo/corrales warmly thanks Catherine Chevalier who helped organize this event.

For more information on the work of Karl Holmqvist, visit his website
Click here to learn more about FACEHUG magazine. 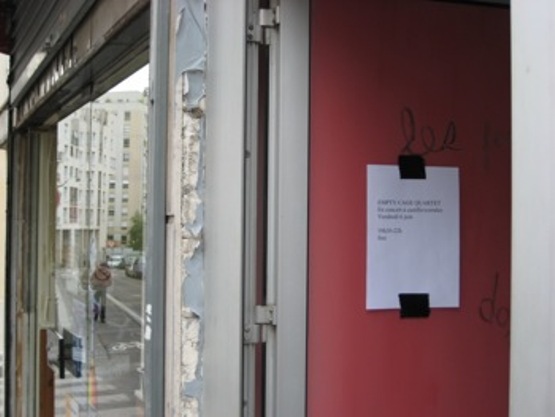 Good friends, it’s been a long hard June. We here at castillo/corrales think it’s high time for a pleasant evening of free jazz. And so we invite you, for the first time ever, to a singular experience in our intimate drawing room. And a last chance to see the beautiful films of AMY GRANAT and EMILY SUNDBLAD. We invite you to come for a pastis and enjoy the first sweet sounds of summer.