THERE’S MORE TO LIFE THAN BOOKS, BUT NOT MUCH MORE at Art Metropole, Toronto

Thursday May 9—Saturday May 11, 2013
Public seminar, curated by Benjamin Thorel 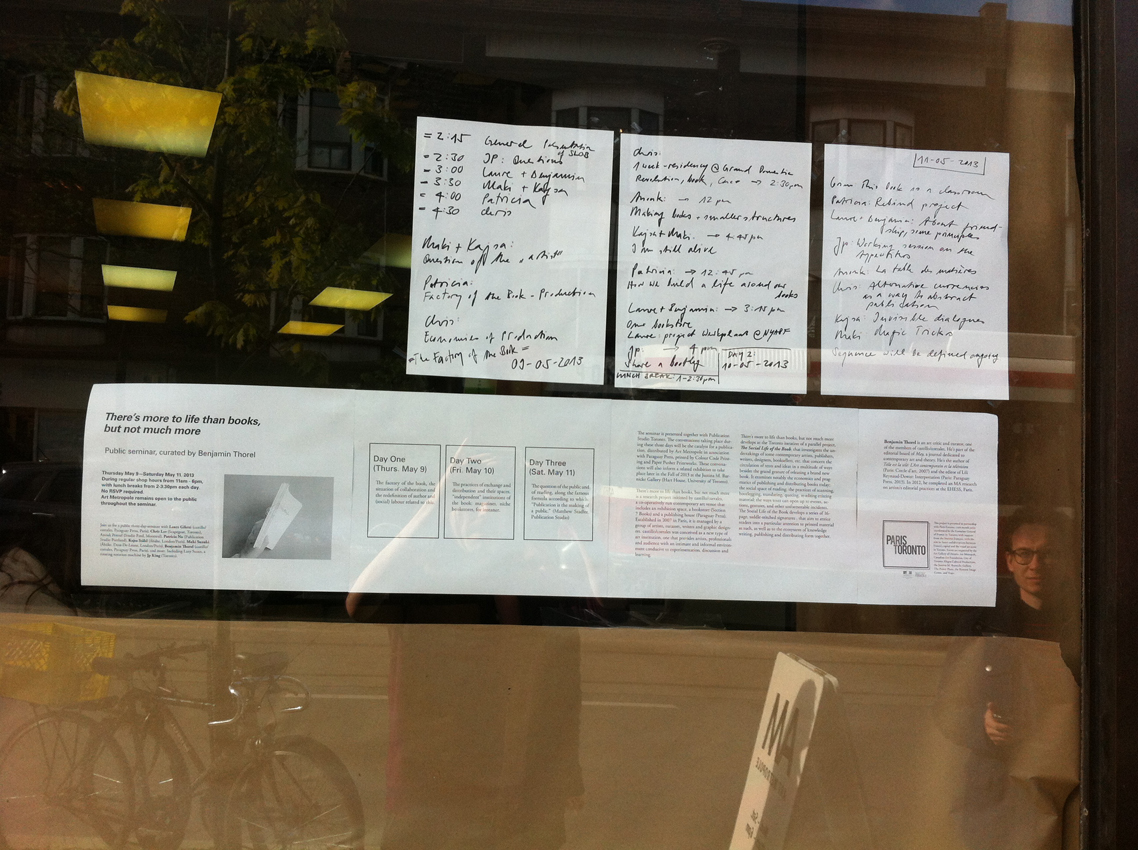 Day One (Thurs. May 9)
The factory of the book, the situation of collaboration and the redefinition of author and (social) labour related to it.

Day Two (Fri. May 10)
The practices of exchange and distribution and their spaces; “independent” institutions of the book (magazines, niche bookstores…).

Day Three (Sat. May 11)
The question of the public and of reading, along the famous formula according to which: “Publication is the making of a public.” (Matthew Stadler, Publication Studio)

The seminar is a research project initiated by castillo/corrales, Paris, in collaboration with Art Metropole, Toronto, and develops as a new iteration of the ongoing project, The Social Life of the Book, so as to investigate the undertakings of some contemporary artists, publishers, writers, designers, booksellers, etc. and discuss problems related to the circulation of texts and ideas. “There’s more to life than books, but not much more” examines notably the economics and pragmatics of publishing and distributing books today; the social space of reading; the practices of scanning, bootlegging, translating, quoting, re-editing existing material; the ways texts can open up to events, actions, gestures, and other unforeseeable incidents.

The conversations in the seminar also formed the basis for the elaboration and construction of the book, A book about – What’s more to life than books, co-published by Publication Studio (Portland), Art Metropole (Toronto), and Paraguay Press (Paris). The collective work that led to this lexicon-like book doesn’t compare to any A-Z memoir about art publishing recently released.

–
This project is presented in partnership with Paris‑Toronto, a ten-month series coordinated by the Consulate General of France in Toronto with support from the Institut français, with the aim to foster collaborations between France’s capital and the visual art scene in Toronto. Events are organized by the Art Gallery of Ontario, Art Metropole, Canadian Art Foundation, City of Toronto, Elegoa Cultural Productions, the Justina M. Barnicke Gallery, The Power Plant, the Ryerson Image Centre, and Vtape.