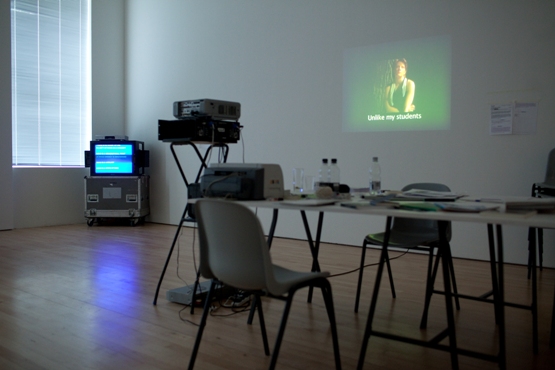 A month-long season of artworks and live events addressing that central feature of human life – the act of speech, “Talk Show” was a project curated by he artist, writer and designer Will Holder, working together with Richard Birkett and Jennifer Thatcher of the ICA.

In addition to an exhibition of speech-based works in the Lower Gallery, and to a dense programme of performances, concerts, discussions, and lectures hosted in the Theater, “Talk show” transformed the ICA’s Upper Gallery into a rolling residency.

Invited to be one of the four residents of “Talk Show”, castillo/corrales converted the space into a temporary office, displaying on the walls notes and drafts about ongoing projects,future developments, and unresolved dilemmas. Artist, and Orchard Gallery co-founder Jason Simon was invited to join for this reflexive moment, and together with him, we explored the instrumentalizing relationships of artists and critics, through the screening of the video-part of the installation by Gareth James and David Joselit Late Night Legal. Formalities (2006) and a rehearsal of the theater play The Interview written in 2007 by Thomas Boutoux and Guillaume Leblon; the instrumentalizing relationships of artist-run spaces and established institutions, through printed material and works such as Open House by Michael Smith and Joshua White from 1999; as well as the problematics of video works production, distribution and exhibition in the form of a survey done by Simon.