A collaborative project between Katinka Bock and castillo/corrales for “Playtime”, Bétonsalon, Paris 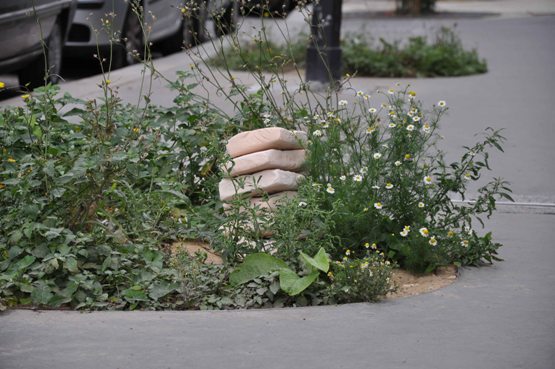 Setting up an art library is an easy thing to do today, or so it seems. Every art center has one, and temporary exhibitions more and more frequently now also host a small library section, a reading room, to complement the artworks on display. Yet, usually it doesn’t mean that a substantial part of the budget of the art institution or the exhibition project gets spent on acquiring books and journals at the expense of the production of the shows themselves or their publicity. No, in fact these collections of books rely principally on donations and the generosity of publishers. To set up an art library, one only needs to pen a convincing letter to publishers about the importance of a project that “makes available to the general public ideas and theories that foster a critical understanding of this or that”, or which will help “counter the forces of an ever-pervasive art market”, etc.
Publishers can only sympathize with it, because these are often the very reasons why they work in this realm, and because one of their concerns is precisely that their books rarely reach this “very heterogeneous” audience that the institution claims to possess, and so usually they do so, they send out their books, free of charge.

There is a tacit acknowledgement in the art world today around the idea that many of the newly released art books ought to be given anyway, and not just to public libraries. As a matter of fact, most of the recent books that are to be found in the private libraries of art professionals were handed after meetings or a studio visit, or received through the post. Public art institutions and commercial art galleries, the two main and almost only subsidizers of art book production today, make sure that the books they finance circulate by offering to their professional acquaintances an important part of the print-run that they get in exchange for their funding. It is because they have given up on the idea that they would eventually get enough money back from bookstore sales to recoup their investments, but also because art books have become primarily understood as tools of promotion and publicity (for institutions, galleries, curators, artists). This is the paradoxical reason why, even stripped of a sui generis effective economy, there have never been so many art books produced as today. And the reason why it has never been so easy, and taken so little time, to build up a new art library, when in the past it only really required passion, and patience.

However, being donated books doesn’t guarantee that one is receiving the finest selection, and that it will eventually constitute a meaningful and distinctive, and thus practical, collection of books that is called a library. But as for everything else today (profit, attendance figures, resume pages, google hits, facebook friends, etc.), the idea that prevails is “the more the better”, and the sheer number of books displayed on shelves seems in the end to be really what makes a library a library.

Shared Letters, Katinka Bock’s project for “Playtime 2009”, proceeds from this analysis, and is an attempt, an experiment, toward the definition and the creation of the library of a new art institution -Bétonsalon, in Paris- under radically different terms. It aims at setting up a library in a way that would be the most attentive and relevant to the different parties involved: the publishers, and the micro-economies on which they rely on to remain independent and develop autonomous book projects; the booksellers, and their dedication to be constantly on the lookout in order to make available a thoughtful selection of titles for a particular context; the institution hosting the library and its distinct, site-specific project, program and investigations; and last but not least the future users of the library and their vital involvement in such a functional place as a public library, from the start.

On the occasion of the “Playtime 2009” festival, Katinka Bock has produced a hundred works in a new series of small hand-made terracota sculptures. During the days that precede the festival opening, these works will be scattered in the public space, the streets, the gardens, the construction sites, surrounding Betonsalon. They are meant to be stolen, taken home, by whoever is interested in owning one or several of them, without any condition, but only one stated wish: that in exchange of the work, the new owner would buy a book for Betonsalon’s future public library.

For this project, Katinka Bock is collaborating with castillo/corrales and its bookstore Section 7 Books: the collector is invited to come to the bookstore to browse through and discuss the books – which come mainly from independent art publishers – and the project itself, in order to choose the title that he or she thinks would be the most relevant for Betonsalon’s library. This part of the process is the crucial of all as the library is not meant to become a storage for any kind of art books, nor an information center, or even only a reading room, but a lending library. Contrary to many libraries that “show” knowledge without doing else out of it, the circulation of printed matter, the discoveries that allow the book, the social implications of reading are at the heart of Shared Letters. Furthermore, the collection won’t be ordered according to the standardized classifications – art; architecture; photography; design; or periodicals; writings on art; individual artists books and catalogues; and exhibition catalogues – but to lending durations (which will range from a few hours to several years), and thus relating to the nature of each book as well as to the various forms of engagement, and uses, from one-off purposes to lengthy companionships, that one can have with them.

During the course of the project, on October 16th, Betonsalon will host Katinka Bock and castillo/corrales for a public discussion on Shared Letters and on a history of artistic projects that have taken the form of libraries, including works and propositions by Michael Clegg & Martin Guttmann, Will Holder, Michelangelo Pistoletto, Martha Rosler, among others.